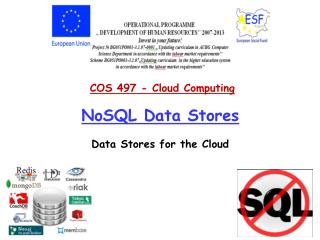 COS 497 - Cloud Computing. NoSQL Data Stores Data Stores for the Cloud. First, some definitions of terms …. SQL JOIN An SQL JOIN clause combines records from two or more tables in a database. It creates a set that can be saved as a table or used as it is. Column Stores For Wide and Sparse Data - . daniel abadi * mit *graduating this year and seeking a job. row- vs.

STORES - Divisional overview. stores. distribution . corporate headquarters. we are an upscale discounter with a focus on

Distributed Data Stores and No SQL Databases - . s. sudarshan with slides pinched from various sources such as perry