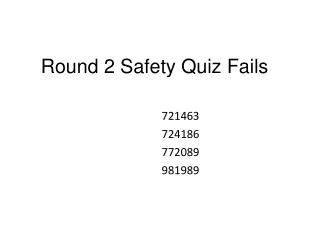 Round 2 Safety Quiz Fails. Figure 3.11: Steps in a stoichiometric calculation. . Limiting Reactant. The limiting reactant is the reactant in a chemical reaction which limits the amount of products that can be formed.

Welcome - . to mr. coble’s class august 2012 please grab a textbook for this course and find an empty seat. let’s get

WELDING INSPECTION AND QUALITY CONTROL - . upon completion of this module you will be able to: identify the different

Warm-Up – 10/14 – 10 minutes - . utilizing your notes and past knowledge answer the following questions: what type of

10 Of The Biggest Technology Fails - List of 10 biggest technology