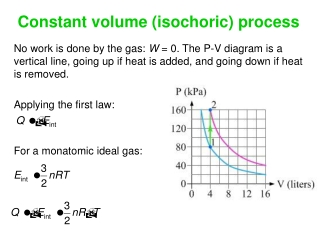 Constant volume (isochoric) process. No work is done by the gas: W = 0. The P-V diagram is a vertical line, going up if heat is added, and going down if heat is removed. Applying the first law: For a monatomic ideal gas:. Constant pressure (isobaric) process. Measurement-A Common Language - . mass. mass. mass. the measure of the amount of matter an object contains matter : the

Chapter 16B: The IPL process - . objectives. in this chapter you will learn: about the ipl process why a system would be

Volume and Density - . volume (capacity). volume is the amount of space taken up by an object. volume can also mean how

The 1 st Law of Thermodynamics The energy of the universe is constant D E univ = 0 - System. the 1 st law of

Volume of a Cylinder - . what is volume?. the volume of a three-dimensional figure is the amount of space within it.

CONSTANT - . constant can be declared in a package , entity , or architecture. constant name : type := value; examples:

Learning outcomes - Recall, explain and use the following relationships a change in pressure of a fixed mass of gas at