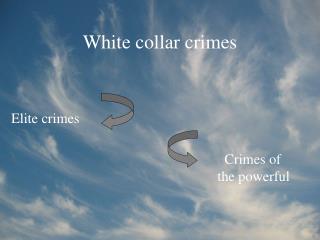 White collar crimes. Elite crimes Crimes of the powerful. Occupational crimes. Offences committed by individuals for themselves in the course of their occupations and the offences of employees against their employers (Clinard and Quinney 1973). All You Need To Know About White Collar Crimes - Anyone can come under the scanner of white collar crimes. even the