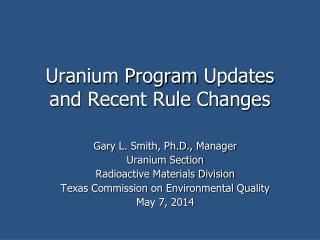 Recent Changes to the Home Affordable Modification Program - Together, we do the community justice. recent changes to the

2010 Law and Rule Updates - . review of new legislation and child care requirements presented by the nc division of child

CUNY group recent activities and updates - . on going work on the validation of idps viirs oc data with lisco’s

Rule Updates - . these languages and methodologies are basically concerned with facts that change there is a set of

Recent Changes and Controversies - . 4th edition - minimising airborne contamination. b2.1 “ there shall be a