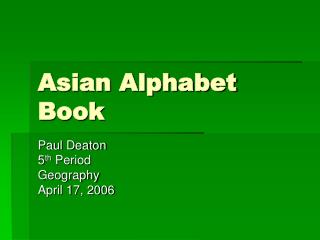 Asian Alphabet Book. Paul Deaton 5 th Period Geography April 17, 2006. A is for Atoll. An atoll is a low, ring-shaped island surrounding a lagoon and is found often in the Maldives. Atolls in the Maldives are beautiful islands for tourists, whose money helps the local economy. Alphabet book - . nicole g ilmore. a-ambassador. ambassador is what all the teachers at ivy june’s school called her

ABC Book of U.S History - . by: salena potts. a. abolitionists - members of the growing band of reformers who worked to