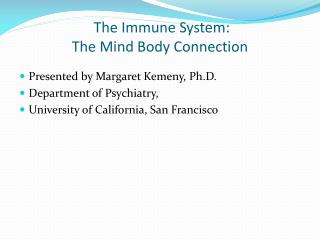 OVER-REACTIONS OF THE IMMUNE SYSTEM - . hypersensitivity reactions and allergic diseases. over-reactions of the immune

The Nervous System - . chapter 7. functions of the nervous system. master controlling and communicating system of the

The Human Immune System - . video. what is the immune system?. the body’s defense against disease causing organisms,

Immune System Part 2 - . http://www.electroresponse.com. much of the text material is from, “principles of anatomy and