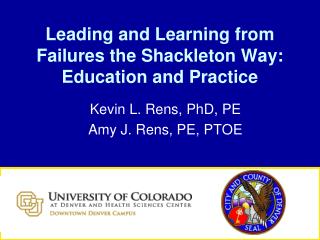 Leading and Learning from Failures the Shackleton Way: Education and Practice

Leading and Learning from Failures the Shackleton Way: Education and Practice

Belarus Structure of the Course - . i. basic facts ii. two definitions of national identity that can be applied to

Myths and Realities in Projecting the Trend of Future URD Cable Failures - . a comparison study presented by dan

Endurance - . 1 pet 1:7. paul, stephan &amp; apostle’s faith was tried by persecutions. christians are put to the

Leading and Developing Personalised Learning Plans (PLPs) - . why are personalised learning plans a priority?. council of

Leading Learning Across the Community (Part II) - . we represent the human side of doing business. ncc purpose. the

A Gift of Fire Fourth edition Sara Baase - . chapter 8: errors , failures, and risks. what we will cover. failures and

FOOD, HEALTH AND EDUCATION FOR ALL: THE ROLE OF DISTANCE LEARNING - Yashwantrao chavan maharashtra open university 13