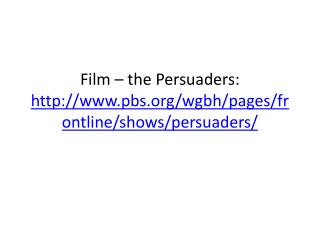 Film – the Persuaders: http://www.pbs.org/wgbh/pages/frontline/shows/persuaders/. Week 5 Lecture 1 : Rhetoric, Persuasion, and the Relationship Between Media and State. Decipher fallacies in arguments, looking at how some questions can bear very confusing and irrelevant answers http://www.pbs.org/wgbh/buildingbig/bridge/basics.html - Bridges: . what is a bridge? why do we need them? what shapes

METAPHORS: THE SUBTLE PERSUADERS - . metaphors. metaphor is a basic part of the way we both see the world and explain it

Creating WWW Pages - . big picture. make sure you have a place to put them plan pages create pages upload pages

http://www.4shared.com/ - Indian citizens who are looking for latest bank jobs in india? freejobsnews is the right place

http://www.9supplements.org/hydrozone/ - This is a complex youth improving item which brings more prominent than quite a

http://www.healthcare24by7.org/biocilium/ - Biocilium :- we ourselves have no idea how much damage our hair goes through