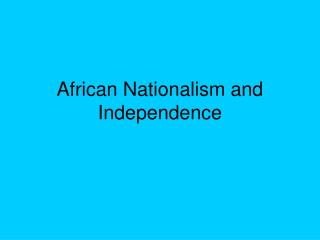 African Nationalism and Independence. 1. Why were many Africans able to win independence after WWII?. Atlantic Charter: supported “the right of all people to choose the form of government under which they will live” – US and Britain Negritude Movement: pride in African culture

Chapter 31 - . nationalism and political identities in asia, africa, and latin america. the rise of indian nationalism.

Decolonization, Nationalism, and The Rise of New Nations - . the 20 th century. global events leading up to

The Hispanic Southwest - . after 10+ years of fighting mexico won independence from spain however, in the following years