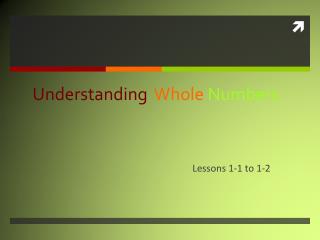 Comparing and Ordering Whole Numbers - . lesson 1-2 acos n1. you can use place value to compare and order whole numbers.

Comparing and Ordering Whole Numbers - . objective. by the end of this lesson, you will be able to compare whole numbers

LESSON 1 WHOLE NUMBERS AND DECIMALS - . learning outcomes. by the end of this lesson, you should be able to: understand

Understanding Place Value - . place value vs. value. value is 4. each digit in a number has a place value and a value. in

Rounding whole numbers and Decimals - . the purpose of rounding…. why do we use rounding? we round numbers to make them