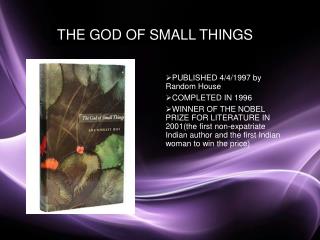 THE GOD OF SMALL THINGS. PUBLISHED 4/4/1997 by Random House COMPLETED IN 1996 WINNER OF THE NOBEL PRIZE FOR LITERATURE IN 2001(the first non-expatriate Indian author and the first Indian woman to win the price). ARUNDHATI ROY. Born as Suzanna Arundhati Roy on 11/24/1961 in Ayemenem The God of Small Things - . class and gender divisions kate liu spring 2005. what sticks in your mind in reading the

God of Small Things - . quiz chapters 3-5. rahel watched estha with the curiosity of a mother watching her wet child. a

The God of Small Things by Arundhati Roy - . contents. arundhati roy the novel kerala – a few facts intertexts and

Eroticism as Politics in The God of Small Things - . brinda bose in desire and in death: eroticims as politics in

Partakers of the Things of God - . a study from the book of hebrews. partake. metechos “to partake of, share in” meta

Small things matter! - . who determines what things are small? seemingly “small” matters are given “extreme”

God is in the ( very small) details! - . for now we see in a mirror dimly, but then face to face. now i know in part;

The Promises of God – The Kingdom of God - . mar 1:14 now after that john was put in prison, jesus came into galilee,