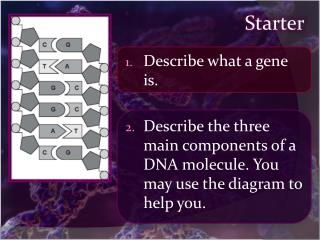 Starter. Describe what a gene is. Describe the three main components of a DNA molecule. You may use the diagram to help you. Starter. A gene is a sequence of bases / part of a DNA molecule or chromosome, that codes for a characteristic/trait/protein. Phosphate Pentose Sugar Nitrogenous Base. The Starter Generator! - Made by mike gershon – mikegershon@hotmail.com. if you want to make the slides whizz through

The Starter Generator! - If you want to make the slides whizz through really quickly and then press escape to choose a

OBJECTIVES - . after studying chapter 19, the reader should be able to: prepare for ase electrical/electronic systems

The Team - . welcome to intercontinental johannesburg o.r. tambo airport . getting to know you. name your new role think

Clicker: Silly starter question - . according to www.fbi.gov , how many fbi special agents were there as of may, 2013?