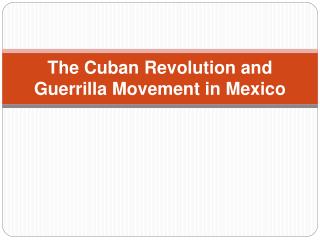 The Cuban Revolution and Guerrilla Movement in Mexico The Cuban Revolution and Guerrilla Movement in Mexico. Independence In Cuba. Cuba gained independence from Spain on December 10, 1898. The change from colony to republic was not a smooth one. Wealth generated by sugar production dictated Cuban politics. . U.S. Military in Cuba.

The Cuban Revolution and Guerrilla Movement in Mexico

The Industrial Revolution - . historical significance of the industrial revolution. an ancient greek or roman would have

Chapter 1 - . safety and health movement then and now. major topics. developments before the industrial revolution.