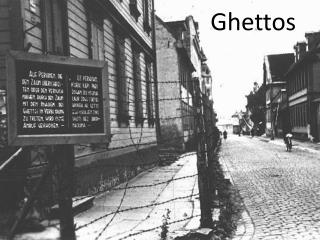 ghetto - . the jewish section of a city elie wiesel lived in a ghetto called sighet. anecdote. a short, interesting story

The Ghettos - . a usually poor section of a city inhabited primarily by people of the same race, religion, or social

Ghettos - . the holocaust. ghettos in history. from the word geti meaning foundry jewish ghetto in rome/venice

Ghetto Riots - . aims:. identify why riots took place in northern cities of the usa in the 1960s. understand why some

Resistance In the Ghettos - . by: grace pouliot. mordecai aniellewicz. “ it is impossible to put into words what we

Jewish Ghetto’s - . by: ericka anthony. a ghetto is a certain area where jews are relocated to. the area is surrounded

Holocaust questions and answers - . by melanie parke. questions 1. what are the ghettos?. answer 1. during world war ii ,

A typical room in a ghetto - The nazis used public displays to spread their ideas of race. the chart shown here is titled

Intro to the Holocaust - . swbat: describe the escalation of jewish mistreatment leading to and during wwii. do now

Ghettos - . a brief history as it relates to our america. ghetto: the beginning. the term ghetto began in the year 1512

The Problem - . black children in central urban ghettos do poorly on all subjects reading: more than 2 years behind the