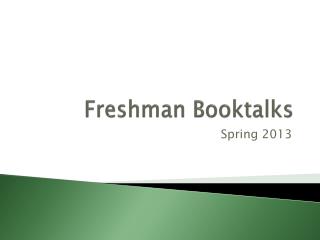 Freshman Booktalks. Spring 2013. 1 st Period. Welcome Freshmen!. Books checked out today will be due_______!. Perfect by Natasha Friend. Following the death of her father, a teen uses bulimia as a way to avoid her mother's and ten-year-old sister's grief, as well as her own. . Booktalks by Phyllis Clark - . journey to nowhere i remember the alamo conestoga wagons. booktalks. all the books in

FRESHMAN - Ucsd bioengineering: premedical major not a ccredited by a commission of the accreditation board for

FRESHMAN - Revised 08/02/10. ucsd bioengineering major accredited by the engineering accreditation commission of the

Freshman 101 - . what you need to know this year!. why you’re here today. we want to review with you your current

Freshman Director! - . we will now call up the nominees for freshman director! each candidate will give a short speech