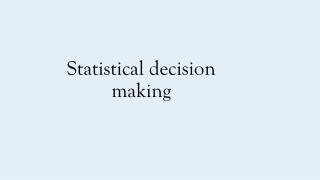 Statistical decision making. Frequentist statistics. frequency interpretation of probability : any given experiment can be considered as one of an infinite sequence of possible repetitions of the same experiment, each capable of producing statistically independent results.

Statistical Decision Making - . analysts must often make decisions about some condition in the real world. assume that

Statistics and its role in Policy, Academia and Decision-Making - . michelle rolingson-pierre vp financial and capital