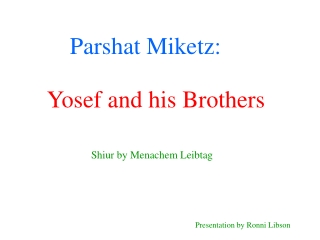 Parshat Miketz:. Yosef and his Brothers. Shiur by Menachem Leibtag. Presentation by Ronni Libson. Story of Yosef and his brothers. Problematic:. Yosef’s brothers plan to kill him for what appears to be petty jealousy.