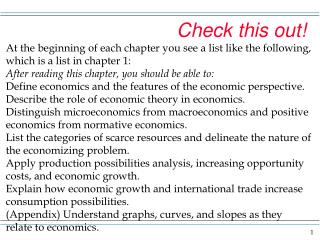 Check this out! - PowerPoint PPT Presentation Check this out!. At the beginning of each chapter you see a list like the following, which is a list in chapter 1: After reading this chapter, you should be able to: Define economics and the features of the economic perspective. Describe the role of economic theory in economics. Check Out for Uniform Suppliers - Are you seeking for uniform of industrial people? then you are landed on right place,

Are you planning to become a dialysis technician in the near future? Time to check out what OSPMI has to offer! - Ospmi

Check Out These Books! - . by jillisa student. the aurora county all-stars by deborah

Check it out! - . 1.4.1: representing constraints. read the scenario and answer the questions that follow. roshanda pays