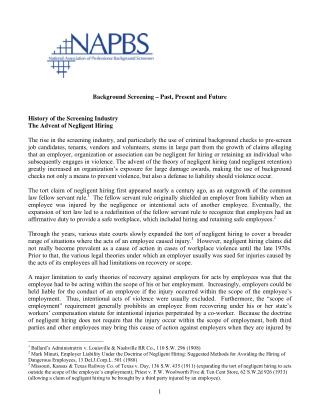 Background Screening – Past, Present and Future : The Source

The rise in the screening industry, and particularly the use of criminal background checks to pre-screen
job candidates, tenants, vendors and volunteers, stems in large part from the growth of claims alleging
that an employer, organization or association can be negligent for hiring or retaining an individual who
subsequently engages in violence. Visit us : https://www.employment-screening.com/

Background Screening – Past, Present and Future : The Source

Background - . in may 2003, the chief executive announced that the government had begun to study the establishment of a

Selection the Best People - . kyaw nu trainer of hrm kyawnu2009@gmail.com. selection. “ the process of choosing from a

“What You Need to Know About The ‘New’ CoPs and Interpretive Guidelines” - . jennifer kennedy, ma, bsn national

Preparing Physicians For The Interview process

BRIEF BACKGROUND ON THE GPH-CPP/NPA/NDF PEACE NEGOTIATIONS - . insurgency problem has been with us for 42 years