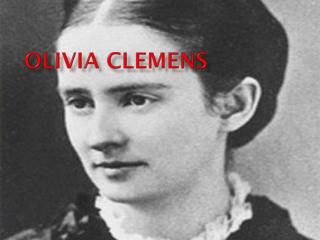 Olivia - . unit 5.1. fantasy. a fantasy is a made-up story that could not happen in real life. . wearing people out. she

Samuel Clemens - . aka, mark twain. early life. born in 1835 grew up along the mississippi river in hannibal, missouri

Samuel Clemens International Baccalaureate - . alumni share their successes and their views on the ways their ib

Sam and Livy clemens - . by aashish jaswal. the langdons. were an influential family in elmira were also very wealthy

Samuel Clemens International Baccalaureate - . excerpts from comments by clemens ib alumni about how the program helped

By Olivia Santiago - . ra was the sun god he had the head of falcon and sun disk in his

By Olivia Taylor - . geographic location. coral reefs are found in tropical regions around the equator . they tend to be