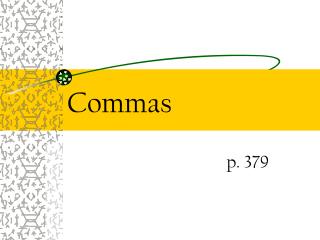 Commas. p. 379. Commas. Keep in mind… “Separating” elements with commas means placing a comma between two equal elements He likes pizza, hamburgers, and steak. “Setting off” an element means putting commas before and after it Poe, who wrote “The Raven,” is buried in Baltimore. Commas.