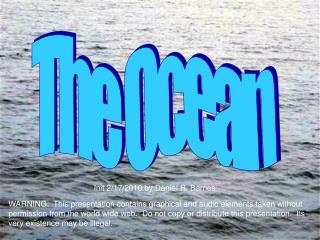 The Ocean. Init 2/17/2010 by Daniel R. Barnes. WARNING: This presentation contains graphical and audio elements taken without permission from the world wide web. Do not copy or distribute this presentation. Its very existence may be illegal. Geography. CONTINENTS AND OCEANS. ?. ?. Europe. The Ocean - . by: mary rose lunde. coral reefs. coral reef. known as the “rainforest of the ocean,” coral reefs are

The Ocean - . a life under the sea. just the facts…. the ocean covers about 70% of the earths surface and contains 97%

The Ocean - . earth: the only planet w/ oceans (or liquid water) covers 71% of earth’s surface “divided” into 4

The Ocean... - The last frontier on earth. the ocean. academic. warm up…. please read and complete the

The Ocean - . by cyrus li, lincoln tong and marcus chow. animals . there are many animals in the sea. there are fish,

The Ocean - . a deep sea study by nm and k b. food web. conditions of the biome. sunlight: sunlight controls the

The Ocean - . by: sadeer 3c. contents. components of the ocean slide 3 pictures of the habitat slide 4 animals that live

The Open Ocean - . the atlantic by: heather smith and elizabeth mynhier. climate. the ocean’s climate is very diverse

The Ocean System - . the ocean covers 70% of the earth’s surface. there is one ocean with many ocean basins, such as

The Ocean Floor - . seeing by sonar. so und n avigation a nd r anging a ship sends sound waves to the ocean floor. the

The Ocean Floor - . anything which looks like this is a link to the next page!. next. what do you think of when you