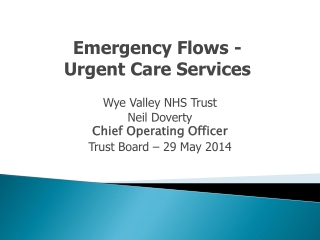 Urgent and Emergency Care - . the urgent &amp; emergency care stall will focus on two of the four elements of the

Urgent Care - At integra urgent care, you can walk in, register online and wait your turn at home or even opt for video

Transforming Urgent and Emergency Care Day Two - . what we learnt yesterday. objectives. have increased understanding of

CARE FLOWS - . “giving practitioners the confidence to work in the health and social care sector in another country,

Urgent Care Center - Ag urgent care centers treat illnesses and injury that can’t wait until the next day. if you cut