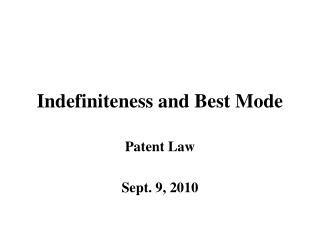 Indefiniteness and Best Mode. Patent Law Sept. 9, 2010. Disclosure/Enablement, § 112. ¶ 1 Written Description of Claimed Invention. ¶ 1 Enablement of one skilled in the art without undue experimentation of:. • how to make. • how to use. ¶ 1 Best Mode contemplated by inventor. Mode-Mode Resonance - . a linear-nonlinear process. simple beam instability. let us consider it is well known that the

Differences Between DFU Mode and Recovery Mode - In a certain aspect, they are very similar and people may get confused

Which aerobic exercise mode is best? - . compare each mode relative to the following criteria degree of overload on

Mode - . a critical term usually identifying a broad, but identifiable literary method, mood, or manner, that is not tied