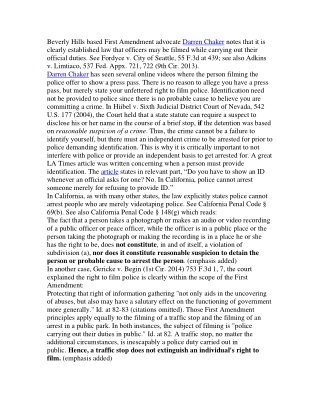 Beverly Hills based First Amendment advocate Darren Chaker notes that it is clearly established law that officers may be filmed while carrying out their official duties. See Fordyce v. City of Seattle, 55 F.3d at 439; see also Adkins v. Limtiaco, 537 Fed. Appx. 721, 722 (9th Cir. 2013).
Darren Chaker has seen several online videos where the person filming the police offer to show a press pass. There is no reason to allege you have a press pass, but merely state your unfettered right to film police. Identification need not be provided to police since there is no probable cause to believe you are committing a crime. In Hiibel v. Sixth Judicial District Court of Nevada, 542 U.S. 177 (2004), the Court held that a state statute can require a suspect to disclose his or her name in the course of a brief stop, if the detention was based on reasonable suspicion of a crime. Thus, the crime cannot be a failure to identify yourself, but there must an independent crime to be arrested for prior to police demanding identification. This is why it is critically important to not interfere with police or provide an independent basis to get arrested for. A great LA Times article was written concerning when a person must provide identification. The article states in relevant part, u201cDo you have to show an ID whenever an official asks for one? No. In California, police cannot arrest someone merely for refusing to provide ID.u201d
In California, as with many other states, the law explicitly states police cannot arrest people who are merely videotaping police. See California Penal Code u00a7 69(b). See also California Penal Code u00a7 148(g) which reads:
The fact that a person takes a photograph or makes an audio or video recording of a public officer or peace officer, while the officer is in a public place or the person taking the photograph or making the recording is in a place he or she has the right to be, does not constitute, in and of itself, a violation of subdivision (a), nor does it constitute reasonable suspicion to detain the person or probable cause to arrest the person. (emphasis added)
In another case, Gericke v. Begin (1st Cir. 2014) 753 F.3d 1, 7, the court explained the right to film police is clearly within the scope of the First Amendment:
Protecting that right of information gathering "not only aids in the uncovering of abuses, but also may have a salutary effect on the functioning of government more generally." Id. at 82-83 (citations omitted). Those First Amendment principles apply equally to the filming of a traffic stop and the filming of an arrest in a public park. In both instances, the subject of filming is "police carrying out their duties in public." Id. at 82. A traffic stop, no matter the additional circumstances, is inescapably a police duty carried out in public. Hence, a traffic stop does not extinguish an individual's right to film. (emphasis added)
Other courts have also repeatedly established a person who is merely filming police may not be detained or arrested. See, e.g., McComas, 2017 U.S. Dist. LEXIS 50783, 2017 WL 1209934, at *7 ("A reasonable officer in [defendant's] position would have known that it is a violation of a constitutional right to harass an individual who is peacefully filming the officer."); Barich v. City of Cotati, No. 15-CV-00350-VC, 2015 U.S. Dist. LEXIS 142672, 2015 WL 6157488, at *1 (N.D. Cal. Oct. 20, 2015) ("Thus, 'under the law of this circuit there is and was' at the time of [the defendant's] conduct 'a clearly established right to record police officers carrying out their official duties.'")
Thus, no matter how much intimidation police may interject into a situation u2013 that person has no obligation to identify him/herself or cease filming. The ugly reality is after watching dozens of videos online, is that citizens are pressured to produce identification, often stop filming, are detained, and even roughed up. The First Amendment was here first and Darren Chaker encourages people to stand on that foundation. Darren Chaker explains a few a few tactful ways you may want to enforce your First Amendment rights:
Overwatch: If you, the person filming, believe police will surround, harass, or otherwise intimidate you, have a third-party conduct overwatch. Overwatch is simply having an observer film you from a distance. Overwatch is important since police can take your phone/camera, and write anything they want in their report to justify the action taken. For example, u201cSubject became hostile, hit me, and I subdued (beat) him/her to effectuate an arrest.u201d The key to combat this is to (1) do not alert police to the overwatch; allow the officer to testify under oath about what he alleged happened; and (3) then forward a copy of the video showing the officeru2019s report and testimony are clearly contradicted by video. To add icing to the perjury cake, email the Public Defender who often represent 80-90% of defendants so when/if that officer comes into court, he/she will be impeached with prior false testimony. You have effectively ended that officeru2019s career since if he/she is not charged with perjury, that officer will always be haunted by the contradicted testimony in any court the officer appears in. In San Diego the Public Defender has a database of police officers with past issues of perjury and abuse. See article. Another good option is to film police where you are standing in view of security cameras. For example, in the parking lot of a bank, gas station, etc. If something adverse happens, you or your attorney can subpoena the security camera footage to contradict any allegation you were hostile, threatening, attacked an officer, etc. Keep in mind, it is common for security cameras to not work, and that businesses like banks and gas stations often rely on police for help, so do not rule out the video is deleted as a favor.

Secure Video: Alternatively, when you video police, use the ACLU Mobile Justice App. that uploads your video to the ACLU server, thus prevents the video from being destroyed. Another option is to LiveStream your video on FaceBook or YouTube where it is retained. Be sure to not record video on an external SD card since the card can be simply removed.

Secure Phone: Be sure to your phone is encrypted and you have a complex password to access it. Often times, you can lock your phone but still continue recording. The United States Supreme Court issued its ruling in Carpenter v. United States, 585 U.S. ____, No. 16-402 (June 22, 2018) requires police to get a warrant to access your phone. If the officer says, u201cI will get a warrantu201d encourage him/her to do so! Ultimately, if you are conducting yourself lawfully, filming the police is not against the law and a search warrant cannot be issued for such conduct. Literally, a search warrant cannot be issued to merely get into your phone since it is not on the limited roster of crimes a search warrant may be issued for. See the Los Angeles County District Attorneyu2019s memo on this. Thus, do not fall for the u201cI will get a warrantu201d bluff that is aimed at inducing consent.

Do Not Consent: Do not consent to allowing police to search your phone. Once you consent, anything on your phone can be used against you. Schneckloth v. Bustamonte,412 U.S. 218, 219 (1973); United States v. Lopez-Cruz, 730 F.3d 803, 809 (9th Cir. 2013); United States v. Vanvliet, 542 F.3d 259, 264 (1st Cir. 2008). As the Electronic Frontier Foundation puts it, tell police: u201cI do not want to talk to you. I do not consent to a search. I want to speak to my attorney.u201d Understand the seasoned officer may craft his request in an artful way to gain consent, such as: I just want to make sure you are not videotaping our undercover cars or officers since that can jeopardize lives. You give police your phone and your video are deleted. Donu2019t fall for a ruse. Stand your ground and invoke your rights.

Do Not Interfere: Absolutely, do not interfere with the police carrying out his/her duties. Do not speak to the suspect, do not speak to police, or get in the way. Be a silent observer from a safe distance. With todayu2019s technology one need not be in the officeru2019s face with a camera, but can be across the street and zoom in on where police are. You do not want to give police a reason to say you were interfering with his/her duties and arrest you on that basis.

"[T]he First Amendment protects a significant amount of verbal criticism and challenge directed at police officers." City of Houston v. Hill, 482 U.S. 451, 461, 107 S. Ct. 2502, 96 L. Ed. 2d 398 (1987). However, Darren Chaker does not endorse or encourage anyone to berate or harass the police. Police do a very tough job and should be watched especially in this day and age of police abuse becoming increasing more publicized due to people filming the police. Most police are good people with good intentions, but some are not. However, regardless of what type of police officer you come across, you have the First Amendment right to get your phone out and video how they interact with the public.
Of course, do not rely on the above for legal advice and only rely on the advice of your own attorney.

Police have a difficult job to do. But with that enormous power comes with it scrutiny. Elements of Film Noir From the French, meaning “black Film” or “Film of the Night” - . hum 110: introduction to

Video Blog ( Vlog ) - . dr ira kaufman lynchburg college school of business and economics . what is a vlog ?. a vlog is a

This was the room that we protested in to save Lively. - This blog post is one of my biggest accomplishments because it

How to Deal with Comments on Your Blog? - . blogging. most blogs allow visitors to the blog to post comments on any of

AN EFFECTIVE STATISTICAL APPROACH TO BLOG POST OPINION RETRIEVAL - Jiyin he university of amsterdam. an effective

Posting to a blog - . skills : creating and editing a blog post it concepts : none. this work is licensed under a

WHAT IS A BLOG? - . computer applications. “website that allows users to reflect, share opinions, and discuss various

Film Finance - . aims: to gain an understanding of how hollywood studio and independent film gets made. to research the