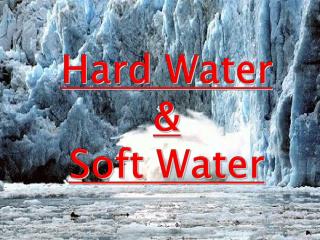 Hard Water & Soft Water. First Things First. What is Water Hardness ?. Hard water. Groundwater dissolves rocks and minerals releasing calcium, magnesium, and other ions that cause water to be hard. These dissolved ions give hard water its characteristics. Hard water. Salty, Hard, Soft - Write up : please use the appropriate levelled vocabulary in your evaluations . assessment

Hard and Soft Engineering - . pop quiz. match the following descriptions to the technique. the channel course of the

Hard and soft water - . starter : what has happened to this kettle ? . why is our water not “pure” and what makes it

SOFT AND HARD WATER - . what’s the stuff you get from the tap ? serious problems can stem if unsuitable kind of water