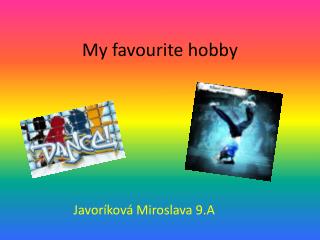 My favourite hobby. Javoríková Miroslava 9.A. Dance is an art form that generally refers to movement of the body, usually rhythmic and to music, used as a form of expression, social interaction or presented in a spiritual or performance setting.

Favourite Sports - . jordan e. hockey is the sport i like the best. my favourite team is, of course, the canucks!. #1:

Hobby Project - . what do you need to do?. choose a topic. you can research and report on any topic or hobby which

WHAT IS YOUR HOBBY? - . 7 th form. what is a hobby?. a hobby is something you like to do very much in your free time.

Lída Stará - . my name is lída stará. i am twelve years old and i am from the czech republic. my favourite colours

6A Unit 6 Holidays - . 徐舍小学 邱叶芬. about me. my name is may. i’m your new teacher today. my favourite food

My hobbies - . oliwia pilarowska kl.6a. my hobby: animals. i love animals ! i have got a dog and a hamster . my favourite

My hobby - . hobby`s are a way for people to relaxing. they are also good for forgetting all for your problems . many

HOBBY - . lesson material . exercise . evaluation . hobby is activity that you really like to do. for example:. so what

My hobby. - Numismatology. my hobby. about me. my name is victor i am a numismatist. my hobby is collecting coins. i have

Our hobbies - . claudia . my hobby is listening to music . my favourite grou p is on e direction. margaret. my hobby is

My hobby . - My hobby. my name is tatyana. i many-sided person, so i have many hobby. i like sport. sport is very