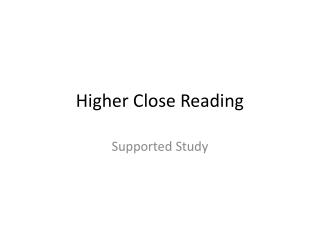 Higher Close Reading. Supported Study. 3. Show how the writer’s use of language in lines 15–20 conveys the Victorians’ disgust at the city they had created. You should refer in your answer to such features as imagery, word choice, sentence structure . . . 4A. Lines 15-20

Close Reading - . “every book has a skeleton hidden between its covers. your job as an analytic reader is to find

Close Reading - . aims. to learn the various ways to answer the different types of questions in close reading to become

“Lamb to the Slaughter” - . objectives: define irony and its types effectively use pre-reading, reading, and