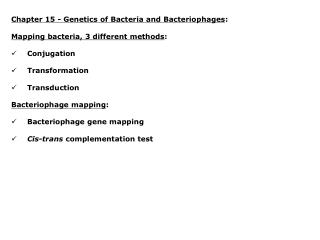 Bacteriophages - . viruses that infect bacteria. named by felix d’herelle c.1917 from the greek phagein , “to

Bacteria - . remember they are everywhere! in your food (yogurt), air (germs) on your body (remember our video?). anton

Welcome to the Wonderful World of Bacteria and Viruses! - . what are microbes?. microbes are living things that are too

2 TYPES OF BACTERIA: Bacteria - Get food from an outside source - Cyanobacteria - make their own food bacteria - small

On what basis have bacteria traditionally been classified? - . shape of colony size of colony gram stain all of the

Bacteria and Viruses - . chapter 19. bacteria. all are prokaryotic – meaning they are all unicellular (entire organism