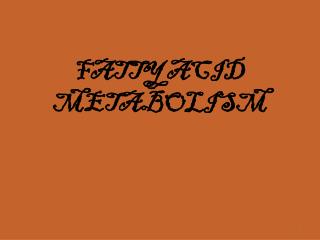 10-14-11 Fatty acid oxidation - . acetyl-coa , the energy-rich molecules composed of coenzyme a and the two carbon

Chapter 23 Fatty Acid Catabolism - . outline. how are fats mobilized from dietary intake and adipose tissue ? how are