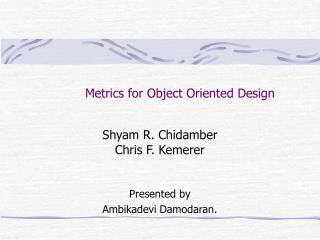 Metrics for OO Software - “ since the measuring device has to be constructed by the observer, we have to remember that

Metrics 101 - . produced by the tmf reference model metrics and reporting sub-team 1 august 2014. agenda. why a metrics

Chapter 24 Technical Metrics for Object-Oriented Systems - . oo metrics have been introduced to help a software engineer

Quality Analysis with Metrics - . ameeta roy tech lead – ibm, india/south asia. why do we care about

A Hierarchical Model for Object-Oriented Design Quality Assessment by J. Bansiya and C.G. Davis - . rationale for this