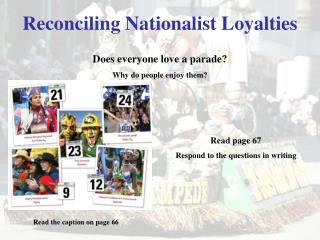 Charlottesville remembers Heather Heyer - A memorial is held for heather heyer, the 32-year-old woman killed when a

Called to Witness: All Means All Training - . a program of reconciling ministries network. called to

Lesson 4: Reconciling Transactions - . training objectives. at the conclusion of this lesson, pcms lapc’s and apc’s

The Work In Process Schedule - . the wip schedule. the poc calculation underbillings overbillings how to use our system

THE MUSICAL CULTURE OF EUROPE - . how does music communicate ideas of national identity?. we will examine european folk

Women in Nationalist and Socialist Revolutions - . what do we mean by “nationalist” revolutions?—revolutions that