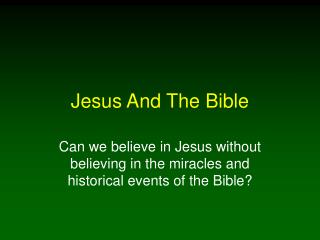 Jesus And The Bible

Jesus And The Bible

The Christ-Centered Life and the Bible - . in pointing out these things to the brethren, you will be a good servant of

The Uniqueness of the Bible - . fulfilled prophecy. unique—“one and only, single, sole; differ from all others;

The Bible and ABP Historical Perspective - . how familiar was jesus with the bible?. how many times does jesus in the

The Word - . jesus and the bible. &quot;you search the scriptures because you think that in them you have eternal