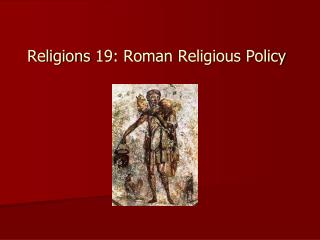 Religions 19: Roman Religious Policy. Was there a Roman policy?. NO! Not in sense of a systematic, deliberate policy (this could not be since the Empire did not have a central religious institution to enforce measures)

The Geography of Religion - The great mosque, mali. the geography of religion. origins and distributions of the major

Anglo Saxons(Religion) - . by: britany cohen and shamoni kirksey. developed from the germanic peoples before the coming

Religion and Equality - . topics to be covered:. 1. bible teaching on equality. 4. attitudes to other religions. 2.

Ancient Mesopotamian Religion - . the western religious traditions (judaism, christianity, and islam) may be traced to a

Politics and Religion: Is Christianity Killing the Separation of Church and State? - . christianity is the dominate

The Origins and Diffusion of Religions - . they who goeth a round getteth around. origin of religions. universalizing

Religion and Human Relationships - . the roles of men and women within a christian family. christian teaching about

The Fall of the Roman Empire - . the dark age begins. causes for collapse. antagonism between the senate and the emperor

Lewis’s Mere Christianity - . hmxp 102 dr. fike. business. who will volunteer a paper for our workshop? if you have a