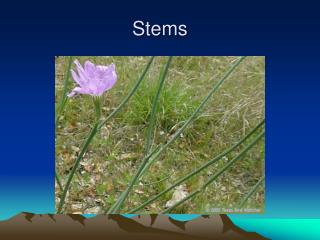 Stems. Stems. A stem is the other structural axis for the plant after roots. It is composed of nodes and internodes . Nodes hold buds which can grow into leaves, flowers, cones, branches, etc… Internodes are the spaces between nodes. Stems.

Plant Structures Roots, Stems, and Leaves - . chapter 23. 23-1 specialized tissues in plants. plants are as successful if

Stems - . baylee berg. definition. stems- plants in which the stock of it can be eaten generally tender and needs little

Thinking Stems - . thinking about thinking . making connections. this reminds me of… an experience i have had like

STEMS - . external form of a woody twig. a. attachment of leaves to twig 1 . alternate (one leaf) 2 . opposite (two

Botany Basics - Stems - . by c. kohn. stems. stems are a crucial part of plant physiology and perform the following