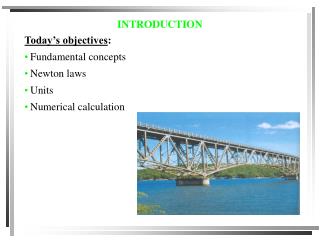 INTRODUCTION. Today’s objectives : Fundamental concepts Newton laws Units Numerical calculation. WHAT IS MECHANICS??. Study of what happens to a particle/body when FORCES are applied to it. Either the body or the forces could be large or small. WHERE IS MECHANICS??. Physics.

Introduction to Amber - . the theory and practice of biomolecular simulations using the amber suite of programs. dr.

Introduction - . i. introduction: marketing in the hospitality industry 1) customer orientation. the purpose of a

Introduction (1) - . introduction (2). despite a growth rate exceeding _8%_ among _pentecostal_ and _charismatic_

Introduction and Welcome - Addressing lead-based paint hazards during renovation, remodeling, and rehabilitation in