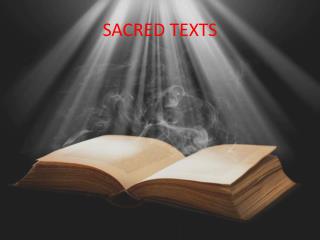 SACRED TEXTS. The Role of Sacred Text. WALT : understand about the way different books are treated and what this shows about the believer's view of them. Sacred Texts. Each world religion has its own special book often referred to as sacred text. Sacred Texts - . the bible and beyond. sacred texts in all religions. torah (judaism) bible (christianity) qur’an

Sacred Texts - . how do we get them?. sacred text do not come from nowhere. they are shaped by many factors. who wrote

Sacred TExts - . christianity. the sacred text of christians is the bible. the bible consists of an old testament and a

Unit 6c: Why are sacred texts important? - The internet. magazines. teachers. where do we get guidance from?. parents/

Unit 6c: Why are sacred texts important? - . the internet. magazines. teachers. where do we get guidance from?. parents/

Dissecting The Vedas — What Are These 4 Sacred Texts? - Contrary to popular belief, the vedas were not an invention of

Sacred Tradition and Sacred Scripture - . rcia september 24, 2015. tradition and scripture. as catholics we