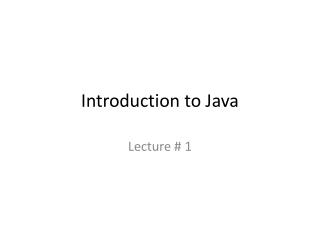 Introduction to JAVA - Java was developed by sun microsystems inc in 1991, later acquired by oracle corporation. it was Introduction to java - Java is one of the world's most important and widely used computer languages, and it has held this Lecture 1 : Introduction to Programming in Java Lecturer : Susan Eisenbach - . this is the 1st lecture on java