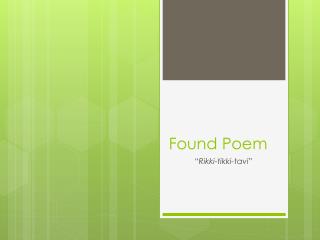 Found Poem. “ Rikki-tikki-tavi ”. My favorite part of Rikki-tikki-tavi was. Find the passage from the text that was your favorite. Focus on finding a passage or two that includes a lot of strong description or dialogue . What is a Found Poem?. Found Poem Directions - . bad boy chapters 15-17. what is a found poem?. a found poem is created when words in an

MLK Found Poem - . using words and phrases from the “i have a dream” speech, create a poem based on the speech. to

Cross-Curricular Found Poem - . what is it?. a found poem uses language from non-poetic contexts and turns it into

POEM - . by spencer wolgamott. couplet. i sit in a tree high in the sky. and i see a apple tree. triplet. i can lick a

Found - . by margret peterson chad geto. setting. this story take place in a town. the town is really small.. this town

Ending Poem - . by: aurora levins morales and rosario morales. this is our country and its run by men!. immigrants

Purpose Poem - . 15 lines each line has at least one “thing” that was purposefully chosen for its effect on the

Metaphor Poem - . what is it?. metaphor: comparing two unlike subjects most poems are metaphors. let’s look at an

Name Poem - . talks a lot with family, yackety-yack, responsible like a parent, efficient. sporty guy. eneregetic as my

Digital Poem - . by: jessica jang. i walked up to the field of green,. i stood still for a little while. i sat down where

CINEMA POEM - . roger mcgough. i like it when they get shot in the head. and there`s blood on the pillow. and blood on

Aztec Poem - . by saleh al-khulaifi &amp; mohammed al- naimi 7d. i am a priest i kill a lot of men i kill for the sun

Which Poem? - . look at the following images and decide which ‘poems from different cultures’ they represent. two