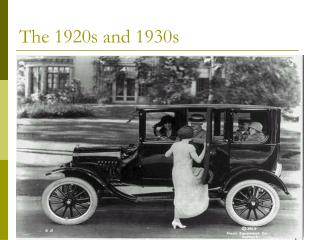 The 1920s and 1930s. The Roaring Twenties. During World War I, many Americans moved to cities. They worked in factories or other businesses . Technology changed American lives. Many people bought cars, especially those built on Henry Ford’s assembly lines . 1920s -1930s - . all that jazz to brother, can you spare a dime?. background/review. finish watching iron-jawed angels

The Arts of the 1920s and 1930s - . but…. tying up some loose ends on foreign policy and disarmament…. kellogg-briand

Political and Economic Integration, 1920s and 1930s - . tracing the territorial changes in the balkan wars and wwi map 1: