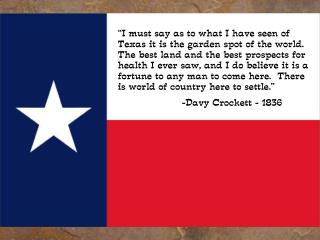 “I must say as to what I have seen of Texas it is the garden spot of the world. The best land and the best prospects for health I ever saw, and I do believe it is a fortune to any man to come here. There is world of country here to settle.” -Davy Crockett - 1836 Texas Independence…

WRITING WORKSHOP - . by: ms. m. menendez edited and expanded by: mrs. a. guerra. “here’s the secret to writing: there