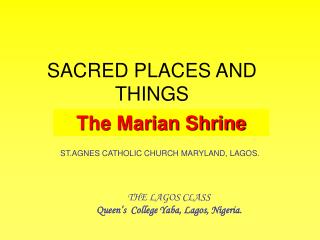 SACRED PLACES AND THINGS. The Marian Shrine. ST.AGNES CATHOLIC CHURCH MARYLAND, LAGOS. THE LAGOS CLASS Queen’s College Yaba, Lagos, Nigeria. . The catholic church is situated at Maryland in Lagos state, Nigeria. It consists of a church and a shrine.

Going Places - . lesson 1. what is your favourite hobby?. do you like traveling?. do you recognize these places?.

Religion - . objectives for the chapter. identify the similarities and differences between universalizing and ethnic

The Sacred Rac - . a critique of the north american culture of consumerism. style of the article. when we look at style ,

Part 2: Universal Forms of Religious Expression - . the sacred, the holy. rituals. things almost every religion has or

Tearing Down Our High Places - . what is displacing god in our lives?. deuteronomy

Religion - . religion is can mean many different things to different people. “religion is the belief in an ever living

Leviticus: Be holy as I am - . external religion?. is religion uniquely personal with few external requirements? what is