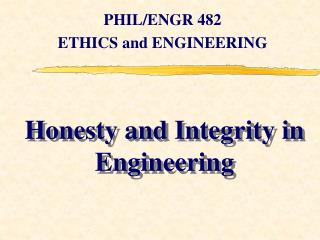 Honesty and Integrity in Engineering

Honesty and Integrity in Engineering

Professional Engineering Ethics Lecture Notes - . the goal. the course will develop a framework on which professional and Ethics, Professionalism and Engineering - . a brief introduction to ethics and ethical behavior in the engineering and

Chapter 6: Engineering Ethics - . motivation: right thing to do abet: “an understanding of the ethical, social,

Ethics in engineering - . lecture 1/4. what is meant by ethics?.

Engineering and Personal Ethics - . for use on and off the job william loendorf, p.e. engineers. engineering is

Honesty, Integrity, and Reliability - . the truth, the whole truth, and nothing but the truth…. case

What do you consider the following: Honest or Dishonest - Totally honest. shady, but ok. totally dishonest. 1 2 3 4 5.

Promoting Integrity in the Next Generation of Researchers - . a curriculum for responsible conduct of research in