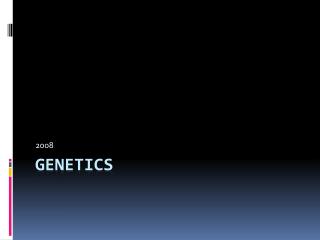 2008. Genetics . Principles. Each Human cell has 46 chromosomes = 23 pairs Each pair consists of 1 paternal and 1 maternal chromosome 2 genes at equivalent loci each coding for an individual polypeptide. Principles. Gametes (ova/sperm) has only 50% of parents genetic constitution

GENETICS - . the blended hypothesis: the traits from 2 parents are mixed to become a third trait. how traits are

13 Genetics - . parents. children. who are the parents of these children?. heredity = continuity of biological traits