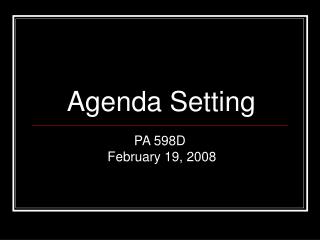 Agenda Setting. PA 598D February 19, 2008. Agenda setting is. The process by which problems and alternative solutions gain or lose public and elite attention.

Agenda Setting - . theory developed by maxwell mccombs and donald shaw in the late 1960s. mccombs and shaw argued that

“The Agenda Setting Function of the Media,” and “Framing Toward Clarification of a Fractured Paradigm” - . agenda

Three kinds of agenda setting: - . focus of this talk is on who or what sets the news media agenda . most studies so far