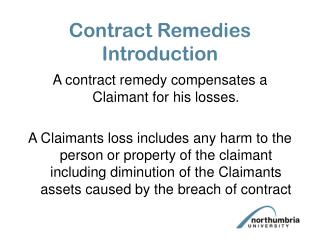 Contract Remedies Introduction. A contract remedy compensates a Claimant for his losses. A Claimants loss includes any harm to the person or property of the claimant including diminution of the Claimants assets caused by the breach of contract. Damages. Nausea After Eating - Causes & Natural Remedies To Tackle It !! - Nausea can be managed through various natural

Regulatory Compliance - . food law fsc-421. what are we talking about?. judicial enforcement remedies available to the

Model Contract (*) for the Sixth Framework Programme - (*) except for actions to promote human resources and mobility.

Injunctions and other Remedies in Water Right Proceedings - . professor cynthia ford the university of montana school of

Introduction to Web Services - . 17 th october 2004. www.eu-egee.org. egee is a project funded by the european union