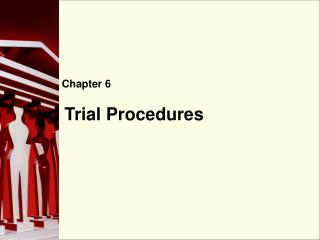 Trial Procedures . Chapter 6. The Adversarial System. Trial procedures in Canada are based on the adversarial system : two or more opposing sides present and argue their case in court.

Chapter 4 - . follow health safety and security procedures. on successful completion of this chapter you will be able

Overview - . paper #1 - an efficacy trial of word generation: results from the first year of a randomized

A Randomized Trial of Supplemental Parenteral Nutrition in Under and Over Weight Critically Ill Patients : The TOP UP

NCIP Storage and Handling Procedures - . presented by: shirelle everett. it is better to not vaccinate than to

Latest News About the CRIMINAL TRIAL PROCESS : AN OVERVIEW - In this infographic, you will see about the latest news of