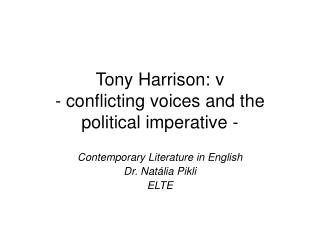 Conflicting Ideologies - . -the differing ideologies between the two powers caused a lot of bad blood between them. -the

Organizing the People’s Voices on Political Controversies - . politicians have opinions (but none of us can remember

Zionism and Conflicting Promises - . diaspora. beginning with the babylonian conquest of judah in 586 bc and culminating

CONFLICTING VIEWPOINTS - . visions for reuniting the nation after the civil war. by lindsay thompson. project

CONFLICTING VIEWPOINTS - . visions for reuniting the nation after the civil war. by ms. thompson. menu. why is it

The imperative mood - . different moods in spanish. mood - expresses how a speaker feels about an action indicative mood