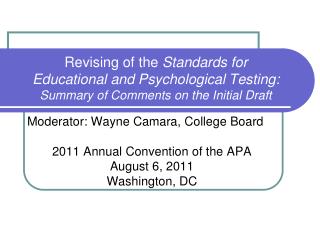 Revising of the Standards for Educational and Psychological Testing: Summary of Comments on the Initial Draft. Moderator: Wayne Camara , College Board 2011 Annual Convention of the APA August 6, 2011 Washington, DC. Scope of the Revision. Incivility in Nursing Education: Using The Joint Commission Sentinel Event Alert #40 as a Springboard for Action

August 15th, 2011 - . why do you think ancient people started writing? and what do you think they based that writing on?.

Recommendations for the Echocardiographic Evaluation of Prosthetic Valves: What is New? - 43 rd pha annual convention.

Kids Can Board Meeting August 25, 2011 First National Bank - . at kids can community center, our mission is to empower